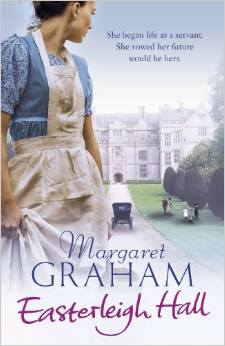 We’ve got the gorgeous Katy Sobey in a Chatterpod with fabulous producer Amelia Paul this week. Katy’s reading Margaret Graham’s Easterleigh Hall for our friends at Audible. One for all you Downton Abbey fans…

“A compelling new series set in County Durham just before the First World War. Perfect for fans of Longbourn and Downton Abbey.
When Evie Forbes starts as an assistant cook at Easterleigh Hall, she goes against her family’s wishes. For ruthless Lord Brampton also owns the mine where Evie’s father and brothers work and there is animosity between the two families.

But Evie is determined to better herself. And her training at the hall offers her a way out of a life below stairs.

Evie works hard and gains a valued place in the household. And her dream of running a small hotel grows ever closer.

Then War is declared and all their lives are thrown into turmoil.”