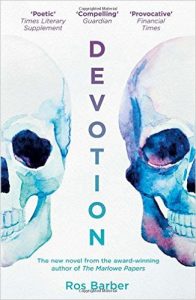 April is angry. Only nineteen, she is an elective mute, accused of a religiously motivated atrocity. Dr Finlay Logan is broken. A borderline-suicidal psychologist still reeling from his daughter’s death, he must assess April’s sanity in a world where – ten years after the death of Richard Dawkins – moves have been made to classify religious belief as a form of mental illness. Both April and Finlay struggle to understand what has happened to them, sharing secrets, silence and an inability to deal with the world around them.

Gently unpicking the lives of these two broken characters, Barber offers a psychologically acute and deeply moving exploration of grief. An extraordinary novel from one of the brightest rising stars in fiction.