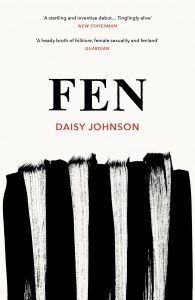 FROM THE MAN BOOKER PRIZE SHORTLISTED AUTHOR OF EVERYTHING UNDER

“Johnson’s heady broth of folklore, female sexuality and fenland landscape reads like a mix of Graham Swift and Angela Carter… For atmosphere, originality and plain chutzpah, this is an impressive first collection.” (Sarah Crown Guardian)

‘Hauntingly written and full of unabashedly, refreshingly angry women… In a year that made me furious, Daisy Johnson’s Fenwas a howl I didn’t know I needed’ Celeste Ng

The Fen is a liminal land. Real people live their lives here. They wrestle with sex and desire, with everyday routine. But the wild is always close at hand, ready to erupt.

This is a place where animals and people commingle and fuse, where curious metamorphoses take place, where myth and dark magic still linger. So here a teenager may starve herself into the shape of an eel. A house might fall in love with a girl. A woman might give birth to a, well, what?