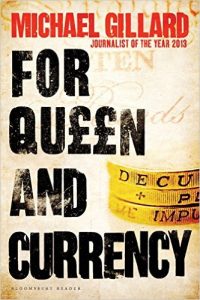 For Queen and Currency: Audacious fraud, greed and gambling at Buckingham Palace by Michael Gillard

For Queen and Currency, read by Colin Mace

Drawing on thousands of leaked documents and police sources, Gillard tells the inside story of a group of Royalty Protection officers who entertained a life of high-risk gambling, brown envelopes of cash and striking gangsta poses on the throne of England while supposedly guarding the royal family and their secrets from terrorism and press intrusion.

Paul Page, a young royal protection officer turned degenerate gambler, ran a hedge fund for police officers during the credit and property booms. His Currency Club bet millions on movement in sterling and gold and paid investors returns beyond the dreams of avarice and financial logic. As word spread to other royal palaces, more protection officers and their friends piled in with savings and cheap loans from banks, many of which were running their own Ponzi scam.

Page was hiding huge gambling losses and when the returns dried up a hit man threatened his family, sending the royal police officer over the edge and on the rampage with a gun.

Scotland Yard tried to spin the scandal to divert attention from its own regulatory failures. But Page refused to go quietly. His sensational trial became an arena to expose the so-called elite royalty protection squad and the private life of a senior royal.