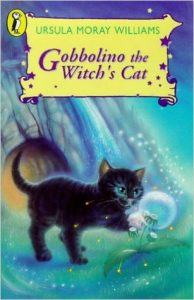 Something for the kids. Gobbolino the Witch’s Cat by Ursula Williams

First published in the 1940s, the story of Gobbolino the witch’s cat with one white paw and bright blue eyes, has been delighting generations of young readers. It’s the charming tale of a cat born a witch’s cat but who would much rather be a kitchen cat. While his sister Sootica learns how to ride a broomstick and turn mice into toads, Gobbolino sets out to find a family to care for him and a home of his own. But Gobbolino is mistrusted wherever he goes, and blamed for myterious happenings such as the farmer’s milk turning sour, and the orphanage children’s gruel turning into chocolate! After many such adventures, Gobbolino finally finds the home of his dreams.