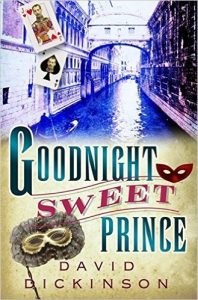 Mystery surrounds the death of Queen Victoria’s grandson England, 1892.
Victoria, Queen and Empress, is in the 54th year of her reign, when her grandson Prince Eddy, eldest son of the Prince of Wales, is found slaughtered in his bed at Sandringham. Terrified of more royal scandal, the Prince of Wales and his spindoctors decide to cover up the facts and the murder is disguised as death by influenza.

Lord Francis Powerscourt, an Irish investigator, is privately asked to find the killer. His quest takes him on a journey through the prince’s debauched and dissolute past, across Europe to the misty waterways of Venice where, amidst scandal and suicide, Powerscourt finally unravels themystery of the sweet prince’s last goodnight.

” ‘In this excellent novel, Dickinson weaves a tale of blackmail and murder among the royals late in Victoria’s reign& [his] knowledge of the arts, history and literature is nothing if not exhaustive, and adds enormously to the overall background& One hopes to see more of Lord Powerscourt and his friends in the near future.’ – Publishers Weekly