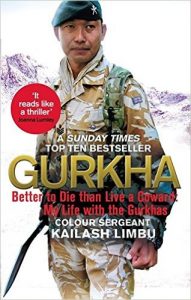 Gurkha: Better to Die than Live a Coward: My Life in the Gurkhas

Gurkha: Better to Die than Live a Coward: My Life in the Gurkhas by Kailash Limbu

In the summer of 2006, Colour-Sargeant Kailash Limbu’s platoon was sent to relieve and occupy a police compound in the town of Now Zad in Helmand. He was told to prepare for a forty-eight hour operation. In the end, he and his men were under siege for thirty-one days – one of the longest such sieges in the whole of the Afghan campaign.

Kailash Limbu recalls the terrifying and exciting details of those thirty-one days – in which they killed an estimated one hundred Taliban fighters – and intersperses them with the story of his own life as a villager from the Himalayas. He grew up in a place without roads or electricity and didn’t see a car until he was fifteen.

Kailash’s descriptions of Gurkha training and rituals – including how to use the lethal Kukri knife – are eye-opening and fascinating. They combine with the story of his time in Helmand to create a unique account of one man’s life as a Gurkha.