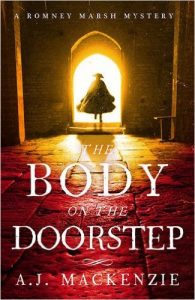 The Body on The Doorstep: A dark and compelling historical murder mystery

The Body on The Doorstep by A.J Mackenzie

The year is 1796. It is midnight on Romney Marsh, in the darkness of a new moon. Smugglers’ boats bring their illicit cargoes of brandy and tobacco from France to land on the beaches of the Channel coast. Suddenly, shots ring out in the night. The rector of St Mary in the Marsh opens his door to find a young man dying on his doorstep.

What do those four words mean? Who is the young man? Where did he come from, and who killed him? Why, five minutes later, was a Customs officer shot and killed out on the Marsh? And who are the mysterious group of smugglers known as the Twelve Apostles, and where does their allegiance lie? When the rector investigates, aided by
his faithful allies Mrs Amelia Chaytor, a local widow, and the young painter JMW Turner, he quickly finds himself involved in a world of smuggling, espionage…and danger.