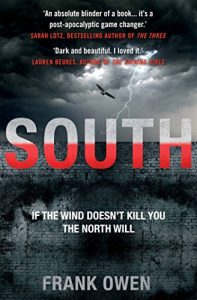 The USA has been ravaged by Civil War. It’s thirty years since the first wind-borne viruses ended the war between North and South – and still they keep coming. Every wind brings a new and terrifying way to die. The few survivors live in constant fear, hiding from the wind – and from each other.

In this harsh Southern expanse, brothers Garrett and Dyce Jackson are on the run from brutal law-enforcers. They meet Vida, a lone traveller on a secret quest. Together, they will journey into the dark heart of a country riven by warfare and disease.

This is the story of Dyce and Vida.

This is the story of The Cure and how it came too late.

This is the story of South.