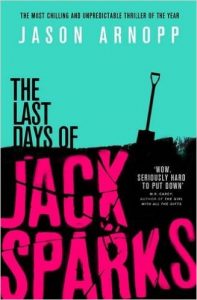 The Last Days of Jack Sparks by Jason Arnopp

THE MOST CHILLING AND UNPREDICTABLE THRILLER OF THE YEAR.

Jack Sparks died while writing this book. It was no secret that journalist Jack Sparks had been researching the occult for his new book. No stranger to controversy, he’d already triggered a furious Twitter storm by mocking an exorcism he witnessed.

Then there was that video: forty seconds of chilling footage that Jack repeatedly claimed was not of his making, yet was posted from his own YouTube account.

Nobody knew what happened to Jack in the days that followed – until now.

‘Wow. Seriously hard to put down…Chilling and utterly immersive’ – M. R. Carey, author of THE GIRL WITH ALL THE GIFTS

Discover The Last Days of Jack Sparks- destined to be 2016’s most talked-about thriller.