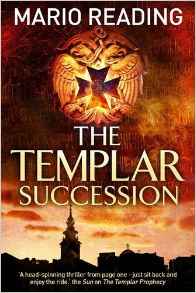 The Templar: Succession by Mario Reading

1998. Kosovo is in the grip of civil war, and John Hart is an aspiring photojournalist determined to capture the devastating scenes. On his mission to shed light on the atrocities he discovers a house where women are enslaved purely for the pleasure of the Serbian soldiers. Hart risks his own life to free the imprisoned women.

2015. John Hart has his world turned upside down when he is left to care for a young woman – the daughter of one of the women he freed that fateful day in Kosovo. She is determined to track down the man known as the Captain: a war criminal, and her father. Unable to turn his back on the girl, Hart sets out to find the Captain. His quest takes him across Europe and into Africa where, on an isolated plateau in the mountains of Ethiopia, he confronts the man who shows no remorse, and no regard for life…