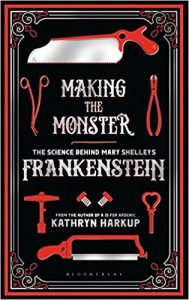 2018 marks the 200th anniversary of Mary Shelley’s Frankenstein, one of the most influential science-fiction stories. Kathryn Harkup’s Making The Monster explores popular culture and the real-life science which inspired Shelley’s creation.

The year 1818 saw the publication of one of the most influential science-fiction stories of all time. Frankenstein: Or, Modern Prometheus by Mary Shelley had a huge impact on gothic horror and science-fiction genres, and her creation has become part of our everyday culture, from cartoons to Hallowe’en costumes. Even the name ‘Frankenstein’ has become a by-word for evil scientists and dangerous experiments. How did a teenager with no formal education come up with the idea for an extraordinary novel such as Frankenstein?

Clues are dotted throughout Georgian science and popular culture. The years before the book’s publication saw huge advances in our understanding of the natural sciences, in areas such as electricity and physiology, for example. Sensational science demonstrations caught the imagination of the general public, while the newspapers were full of lurid tales of murderers and resurrectionists.

Making the Monster explores the scientific background behind Mary Shelley’s book. Is there any science fact behind the science fiction? And how might a real-life Victor Frankenstein have gone about creating his monster? From tales of volcanic eruptions, artificial life and chemical revolutions, to experimental surgery, ‘monsters’ and electrical experiments on human cadavers, Kathryn Harkup examines the science and scientists that influenced Shelley, and inspired her most famous creation.